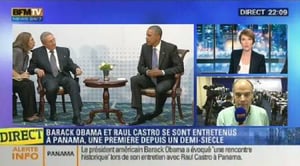 WATERLOO, Ontario — June 4, 2015 — Dejero today announced that BFM TV, France’s premier 24-hour television news channel, is expanding and enhancing its field newsgathering capabilities using the Dejero LIVE+ Mobile App for iOS devices. BFM TV is deploying the app to staff reporters, news freelancers, and other personnel, giving them the ability to cover live events and breaking news, when and where it happens, using only their Apple iPhones or iPads.

“With the LIVE+ Mobile App from Dejero, it’s very easy for our reporters to transmit live, high-quality video without the need for a camera crew or any specialized expertise,” said Quentin Guiné, engineering maintenance and operation manager, BFM TV. “Of all the solutions we evaluated, the LIVE+ Mobile App is by far the easiest to use and provides the best picture quality and cell bonding performance. Our users just press a button on their devices to start transmitting broadcast-quality video.”

Ideal for mobile journalists and professional video contributors, the LIVE+ Mobile App transforms an Apple iPhone or iPad into a powerful tool for broadcasting live video, recording content for later broadcast, or importing and uploading edited video files. So far, BFM TV News has equipped its correspondents in New York City and Washington, D.C., with the apps, with long-term plans to deploy them to field news personnel worldwide.

BFM TV uses LIVE+ Control, Dejero’s cloud management tool, to monitor live video feeds from the apps. The feeds are then routed to a LIVE+ Broadcast Server in the network’s Paris broadcast center for playout to air.

“In only a couple of years, BFM TV has become the most watched news network in France, with more than 10 million daily viewers and an audience that rivals any equivalent news channel in the world,” said Brian Cram, CEO, Dejero. “In order to maintain its market share, BFM TV recognizes that it must provide the most current and breaking news from anywhere and at any time. Our LIVE+ Mobile App is playing a big role in this effort by giving solo videojournalists the ability to use available 3G, 4G, or LTE networks and Wi-Fi hotspots to transmit content that would otherwise be too expensive and difficult to capture using traditional technologies.” Running on iPhone or iPad, LIVE+ Mobile App Enables Remote Reporters to Stream Live, High-Quality Video From the Source of Breaking News.