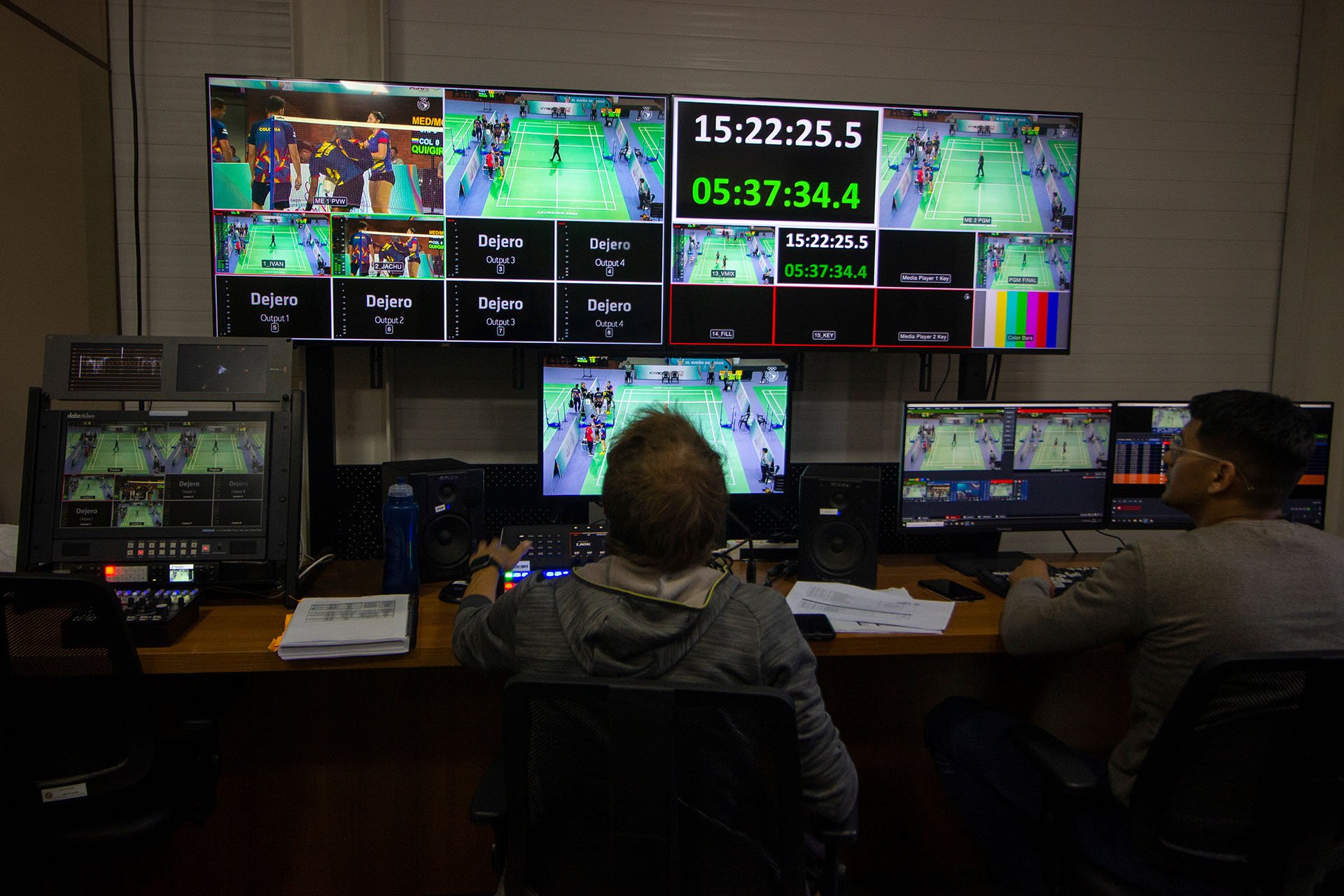 “Using an all-remote workflow, we can produce up to fourteen simultaneous sports at the same time live with a single control,” explains Pablo Reyes, chief production officer at Quality.

The XII South American Games, which run from 1-15 October, involves a record total of 4,526 athletes and 53 sports. Quality has deployed more than 90 cameras to capture live sports in various arenas and other locations across the city.

“We’re the first production company in television history, in partnership with our co-host broadcasters ABC and IMG, to produce a multi-sport production of this scale entirely remotely,” continues Reyes.

Each camera is connected to a Dejero EnGo LTE mobile transmitter using Smart Blending Technology that dynamically and intelligently manages the fluctuating bandwidth, packet loss, and latency differences of individual connections in real-time to simultaneously combine multiple IP connections. Here, they are blending a combination of fiber at the venues and 4G cellular connectivity from diverse local network providers; TIGO, CLARO and PERSONAL, forming a virtual ‘network of networks’ and achieving average upload speeds of 20mbps.

“By using Dejero at all of the venues in Asunción, in the IBC (International Broadcast Center) and in our Buenos Aires hub, we have created a remote production workflow that amounts to an NPV (Net Present Value) saving of approximately USD $2.5million,” claims Reyes. “If you think about our all-remote workflow compared to a traditional multi-OB (Outside Broadcast) truck setup for a large-scale sports production like this, we’ve curtailed the movement of around six tons of extra material and 40 people - not to mention the installation of hundreds of kilometers of cable that would usually be required. The time and cost saved on logistics, resources and time is monumental.”

As the EnGo provides reliable uninterrupted connectivity from any location, the producers, directors, graphics operators and technicians remain in Buenos Aires to package content for distribution from the hub. A microphone at the hub is also connected by an XLR audio cable to a WayPoint receiver, so the director can communicate with camera operators using the EnGo IFB voice communication feature.

The EnGo mobile transmitters, which have a sub-second glass-to-glass latency, are reliably transporting feeds from the fixed sports venues and roaming cameras at the XII South American Games to 23 Dejero WayPoint receivers located at the IBC in Asunción.

Ten additional WayPoint receivers, located at Quality’s Buenos Aires hub, reconstruct and decode the video feeds which are entered into a matrix to be shared with the switcher and replay systems. The packaged content is then uplinked via satellite for distribution to the Rights Holding Broadcasters (RHBs) and inserted into the ingest system for logging and clipping. The RHBs include national local broadcasters, TIGO and Paraguay TV, as well as TyC Sports in Argentina, TVN Chile, CDO Chile, COB Brazil and Panam Sports.

Using an all-remote workflow, Quality can produce up to fourteen simultaneous sports live with a single control

”For events over longer distances such as rowing, canoeing, cycling –and the star discipline, the marathon – our remote workflow and the reliable connectivity that the Dejero EnGo provides allows us to produce them even without using radio links,” Reyes adds.

Using this new remote production model, Quality only sends the EnGo transmitters and camera operators to the sports venues. And, because the devices are easy to operate and don’t require a complex setup, the camera operators and crew are ready to go live within minutes.

“It would be impossible to cover several sports in one day with one or multiple OB vehicles because of cost implications and physical distances,” added Reyes. “The flexible remote production workflow means that cameras are not tethered to OB vans and can easily be moved from one venue to the next.”

“The event has been a milestone in Paraguay's audiovisual history. People on the street are so enthusiastic about the quality of the signal we are producing,” concludes Reyes. ”Meanwhile, the rights holders are complimenting the image quality and signal production every day - and the feedback from the networks has been fantastic.”

Quality is an international broadcast production company based in Madrid, that provides high-tech services and solutions to a range of broadcast organizations, including sports broadcasters, media service providers and more. Since its inception, Quality has worked with and facilitated the audiovisual conversion for the ad-hoc production arm of PRISA, the world’s leading Spanish and Portuguese-language media group in the creation and distribution of content in the fields of culture, education, news and information, and entertainment. Quality has developed a solid reputation for developing different innovations for sports production especially in the field of remote production.