WATERLOO, Ontario — April 4, 2017 — Dejero, an innovator in cloud-managed solutions that simplify the transport of live video and real-time data across remote or mobile IP networks, has announced that its mobile transmitter technology has been chosen by Oklahoma-based privately-owned media company Griffin Communications to support their live news and weather event coverage.

Griffin Communications has rolled out Dejero’s EnGo and GoBox mobile transmitters to support its news crews during the live broadcast of news and weather events that occur in and around the region. 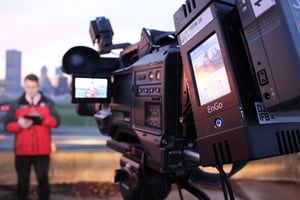 “Using Dejero technology, our team can go live from places where competitors with other equipment cannot get a signal,” said Steve Schroeder, statewide director of news operations for Griffin Communications. “The Dejero form-factor is robust, it takes a beating and keeps on working. I love watching our fleet of storm trackers feeding live video while they’re driving and tracking storms, all without any breakup in transmission.”

The manufacturer’s management system makes it easy for Griffin Communications to set up and manage its equipment as well as keep track of its data usage from a web browser. “We are delighted that our technology is integral in Griffin Communications’ news gathering workflow”, said Bill Nardi, VP Broadcast Integration at Dejero. “Their selection process was tough, but following a series of extensive side-by- side test runs including different manufacturers, Dejero consistently came out on top. We’re proud to be able to deliver the level of flexibility, durability, and reliability that broadcasters like Griffin Communications can depend on to deliver live shots”.

Griffin Communications is one of the few privately-owned media companies in the United States, reaching over 90% of Oklahoma households with its television stations, statewide radio network, Internet sites, digital outdoor network, and mobile information distribution.

Griffin Communications is committed to serving the news, weather and entertainment needs of Oklahomans and fulfilling the needs of advertisers across the state. We do this by hiring people who are passionate about Oklahoma, smart about how they interact with co-workers and viewers and work hard to make sure Oklahoma's voice is heard in all we say and do.