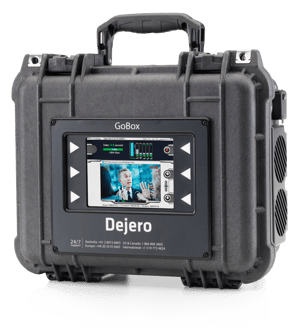 “Our deployment of Dejero’s LIVE+ mobile transmitters last year in our metro stations throughout Australia was a great success, and the units were very well-received by our field news crews. Therefore, when we recently needed additional equipment to cover black spots in our traditional microwave news coverage, the LIVE+ GoBox transmitters were the obvious choice,” said Glen Bathie, Network Ten project manager. “The LIVE+ GoBox transmitters are delivering cost efficiencies by reducing the resources we need for newsgathering when compared to traditional microwave-based systems. Our news producers are able to cover more stories with the same crew numbers, and they’re able to access news when and where it’s happening — even in remote regions far from our broadcast centers.”

The new LIVE+ GoBox units join the fleet of LIVE+ mobile transmitters purchased by Network Ten last October to enable live coverage of breaking news throughout Australia. The GoBox transmitters have been deployed in New South Wales and Queensland to supplement the mobile transmitter units already in use there. Network Ten news crews use the GoBox transmitters to broadcast live news crosses and also to supply feeds of live entertainment programs. Dejero’s LIVE+ Broadcast Servers installed at the network’s broadcast centers in Brisbane and Sydney receive the remote transmissions and process them for air.

In addition to providing high-quality video of breaking news that can be inserted into live news programs, the news crews are able to execute live crosses in situations that are impractical using traditional microwave links. For example, a Network Ten camera operator recently used a LIVE+ GoBox to facilitate a cross from a ski resort while he and the correspondent rode up the mountain on a chairlift.

Bathie added: “The LIVE+ GoBox units provide a highly reliable yet compact solution that has increased the flexibility and range of our newsgathering. And the support we’ve received from the Dejero team here in Australia, as well as internationally, has been fantastic. We’re able to access a Dejero support member at any time of day, which is invaluable to maintaining operations in a 24-hour news cycle. Also, Dejero has been very open and responsive to feedback and the continued development of the products.”

“As our most rugged solution, LIVE+ GoBox can be set up anywhere to transmit low-latency and high-quality HD video quickly and reliably, even in the most challenging conditions and in areas with marginal cellular coverage,” said Brian Cram, CEO of Dejero. “This range is particularly important in a continent as vast as Australia, where news might be breaking in a remote region hundreds of kilometers away from a Network Ten broadcast center. The LIVE+ mobile transmitters give Network Ten a reliable, cost-effective way to cover breaking news from almost anywhere, and the systems' portability allows the news teams to go right to the heart of the story.”