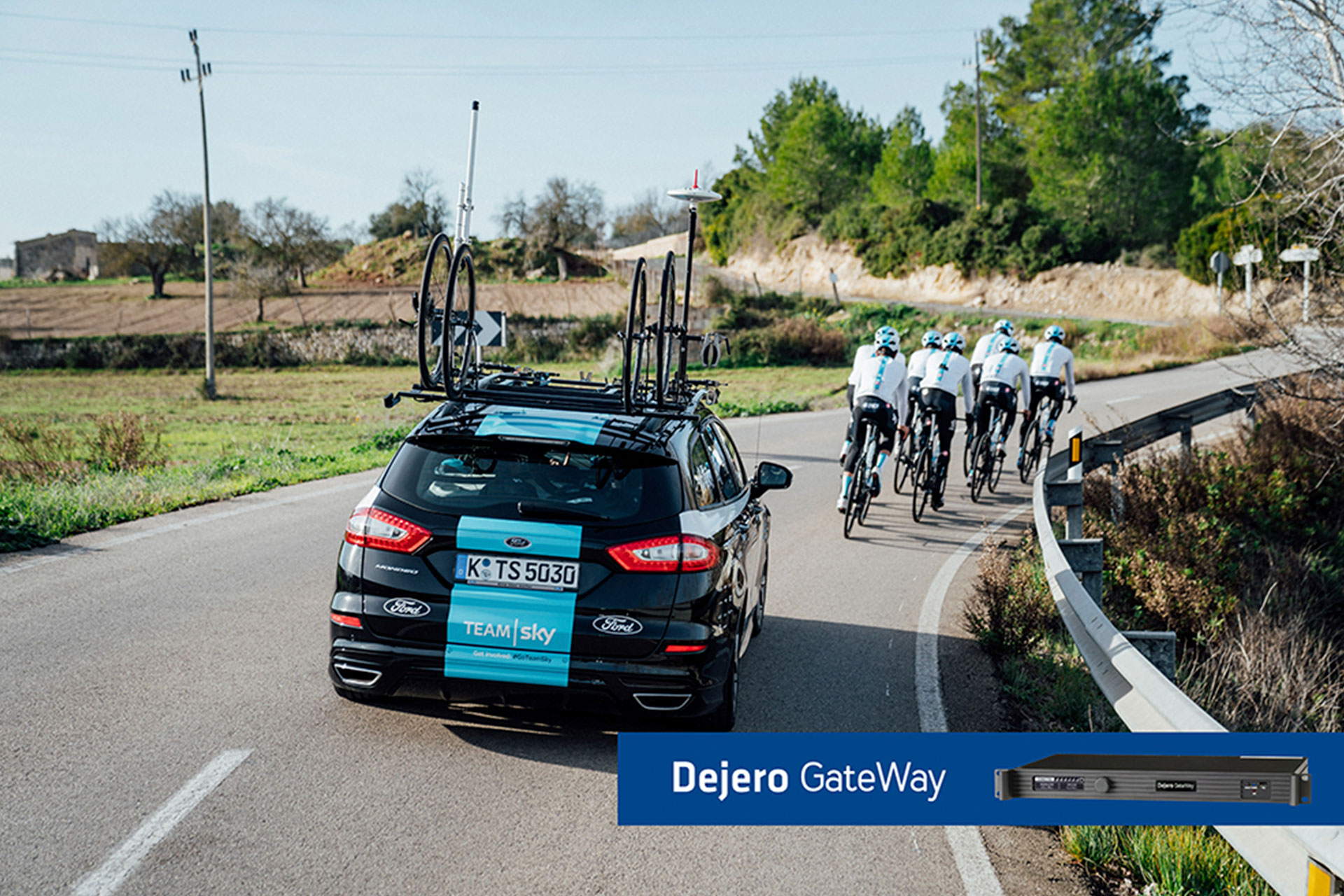 Waterloo, Ontario, June 19, 2018 — Dejero, an innovator in cloud-managed solutions that provide video transport and Internet connectivity while mobile or in remote locations, has partnered with Team Sky to provide them with an in-vehicle mobile connectivity system using Dejero GateWay that allows the British professional cycling team to receive and deliver race related information wherever they may be.

Throughout the UCI WorldTour, Dejero GateWay mobile connectivity is enabling Team Sky to monitor live TV feeds, track live environmental data and social media activity within its 'follow' vehicles in order to anticipate the route ahead of its cyclists, buying the team precious seconds to prepare support in case of crash, injury, punctures and other unforeseen events.

“The idea was to create an additional communications infrastructure to allow us to better share data from director sportiv to rider and vice versa,” said Dr. Scott Drawer, head of the Team Sky Performance Hub.

“In extreme environments it is notoriously difficult to get connectivity to local TV or to access other forms of relevant information, and there are times and places where there can be a huge delay to accessing information due to a lack of connectivity. But, now that we have Dejero GateWay, and its ability to connect to multiple networks and devices, we have a much higher probability of creating a communications infrastructure that enables sharing of information as close to real time as possible, while the vehicles are moving at speed — more reliably and quicker than our competitors.”

Team Sky and Dejero have been testing and developing the system in the racing environment since early this year, and will continue throughout the duration of the UCI World Tour season, which consists of 37 road cycling events in Australia, China, Europe, Middle East and North America. The system is now permanently installed in one of the team’s key cars, which was used during the team’s recent Giro d’Italia win.

Dejero GateWay will be crucial to the team’s performance in the upcoming Tour de France, which sets out from Noirmoutier-en-l'Île, a small island off the Atlantic coast of France on July 7. The world’s most prestigious bike race will see Dejero GateWay aid Team Sky to overcome the connectivity challenges posed by terrain, crowds and weather. 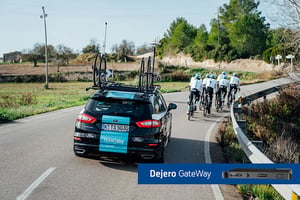 “Our GateWay solution gives Team Sky the assurance that they can receive and deliver race related information in all conditions and all locations,” said Bogdan Frusina, founder, Dejero. “Increasing the reliability and consistency of a signal enables the team to make more informed and faster decisions, putting them ahead of the competition.”

The cyclists will travel through the mainland of France for three weeks competing over cobbles, dirt roads, high mountains, as well as a 31 km hilly time trial through the Pyrenees on the penultimate day. The finish line will be at the Champs-Élysées in Paris on July 29.

“We love that Dejero GateWay is easy to use and we’ve provided a pretty demanding environment in which to test and develop it — across different continents, harsh terrain, and varying weather systems. If GateWay can work in our world, I’m pretty sure it will work in other worlds with ease,” concludes Drawer.

Driven by its vision of reliable connectivity anywhere, Dejero blends multiple Internet connections to deliver fast and dependable connectivity required for cloud computing, online collaboration, and the secure exchange of video and data. With its global partners, Dejero supplies the equipment, software, connectivity services, cloud services, and support to provide the uptime and bandwidth critical to the success of today’s organizations. Headquartered in Waterloo, Ontario, Canada, Dejero is trusted for broadcast-quality video transport and high-bandwidth Internet connectivity around the world. For more information, visit www.dejero.com.

Team Sky is a British-based professional cycling team that competes in the UCI WorldTour. The team is managed by Sir Dave Brailsford, who created Team Sky with the aim to win the Tour de France with a clean British rider within five years – and to help inspire people of all ages and abilities to love the sport of cycling and get on their bikes. In 2012, Sir Bradley Wiggins created history by becoming the first British cyclist to win the Tour de France. This achievement was followed by Chris Froome winning the Tour in 2013 and 2015, making him – at the time – the only British rider to win the race on two occasions. Froome has since added two further Tour de France titles to his record, re-writing his and Team Sky’s name into the history books. For more information, visit www.teamsky.com