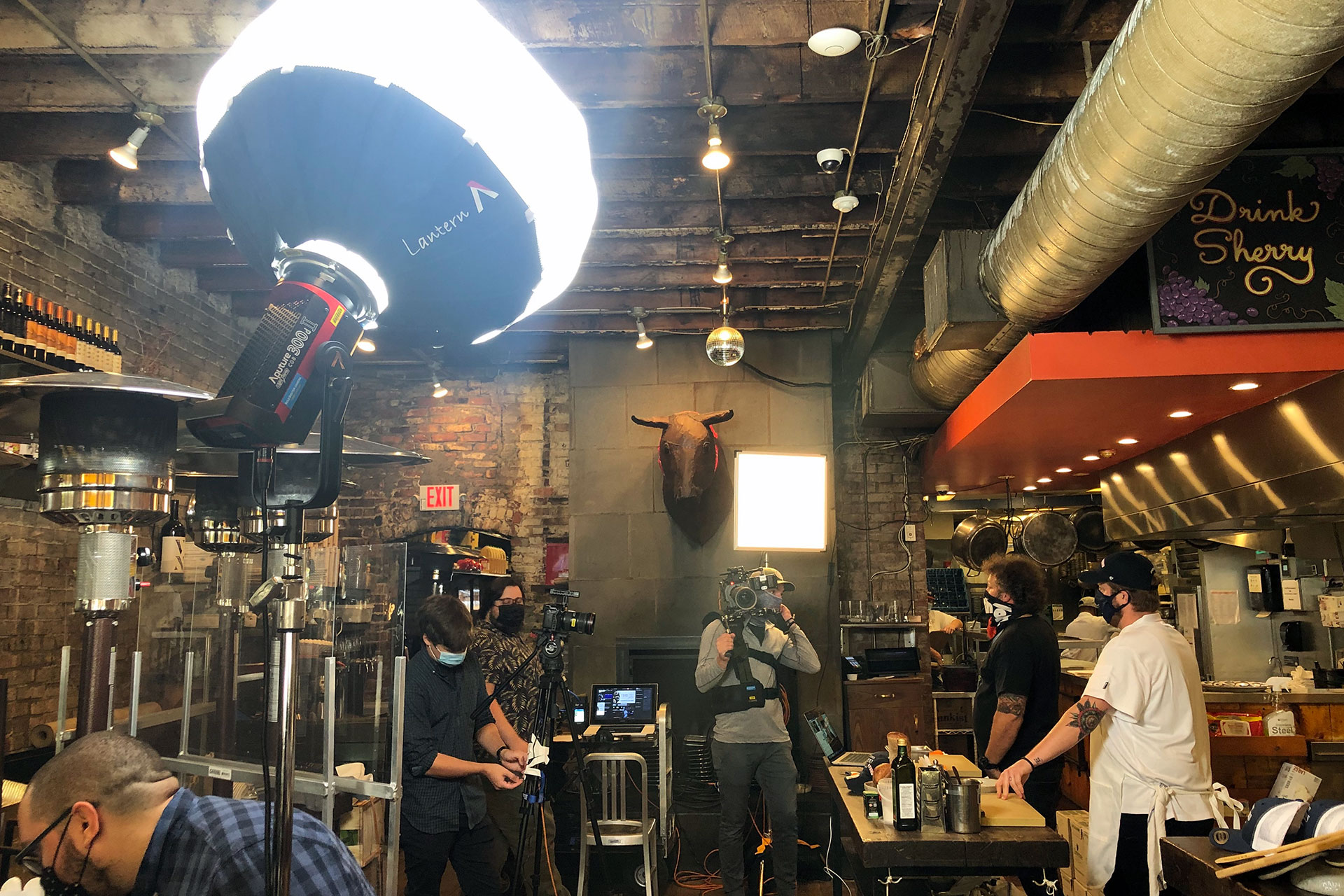 Waterloo, Ontario, December 2, 2020 — Dejero’s EnGo mobile transmitter made it possible for Boston-based video and creative services agency, Bottle Tree Pictures, to save tens of thousands of dollars on live streaming during its recent production of the “Toro Cooks for Jimmy” celebrity cooking fundraiser for The Jimmy Fund and the Dana Farber Cancer Institute. 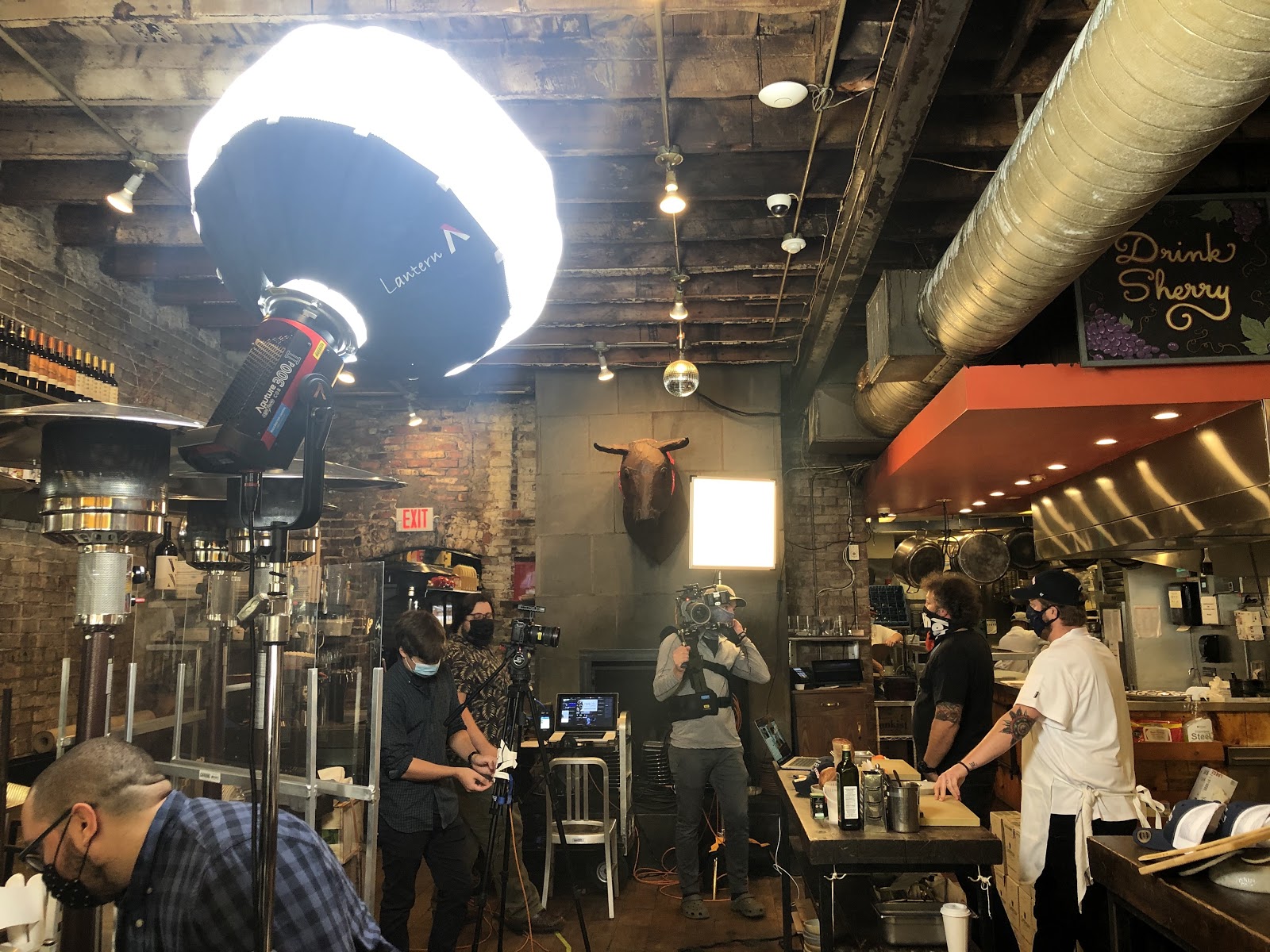 Adapting to the constraints of the small restaurant venue and social distancing, Bottle Tree Pictures chose Dejero EnGo to significantly reduce its footprint for this livestream production

To comply with COVID-19 restrictions and to protect vulnerable members of these groups, the charity made a short notice request to Bottle Tree Pictures to livestream the cooking lesson, from celebrity chef Josh Elliott’s Toro restaurant, so that people could ‘join in’ from home. In ‘normal’ circumstances for this type of event, the production team would constitute at least three camera operators, a sound engineer, a creative director, a technical director working a switcher and graphics, a streaming engineer to handle the infrastructure and a third party streaming company. But this time, considering the constraints of the small venue and social distancing, Bottle Tree Pictures needed to create a much smaller footprint and be as low impact as they could. They decided to use a Dejero EnGo mobile transmitter to livestream with only three crew members. 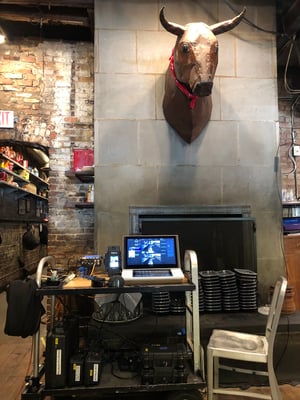 Bottle Tree Pictures will no longer be parking trucks, running lines or waiting for satellite time slots thanks to Dejero EnGo

“We don’t usually do live productions and in the past, we've hired third party companies to handle the streaming, many times costing close to $20,000 and involving a team of people just to get a signal online, but we quickly realized that with the COVID restrictions and a humble fundraiser budget we would have to figure out a new approach to producing this show,” said Dan Gruenpeter, executive producer at Bottle Tree Pictures. “Dejero EnGo was our first instinct to solve the streaming element, since we had worked with the technology in previous TV news production roles. Seeing the multiple bonded cell connections available inside the Dejero EnGo gave us a ton of confidence that our stream was bullet-proof.”

The Bottle Tree Pictures team had just one hour to set up and capture the footage of the celebrity chef cooking three dishes to support the fundraiser before the restaurant returned to fulfilling its regular take-out orders. To that end, the Bottle Tree Pictures team built an entire switcher and streaming rig into a small cart so they could simply wheel it in and out — using the previous workflow, the production would have taken an entire day to set up, and cost up to 10 times more.

“The technology worked without a hitch despite the fact that the show had not been rehearsed which was a little scary. People watching live were able to ask questions and interact in real-time which was the whole point,” said Alex Enman, creative director at Bottle Tree Pictures. “This was a guinea-pig project but ‘Toro Cooks for Jimmy’ broke all fundraising goals that were set and everybody wants to do it again!”

The Jimmy Fund and the Dana Farber Cancer Institute chose Facebook as the live streaming platform for this event due to its in-built fundraising features, and the ability for both the Jimmy Fund to host the stream and for the Toro page to mirror it.

“From now on, when it comes to streaming, we will no longer be parking trucks, running lines or waiting for satellite time slots. With Dejero, we can just turn it on and we’re connected, it’s very portable and the 24/7 tech support is second to none. We no longer have to rely on expensive specialist streaming engineers to manage a complex transmission chain that has multiple points of failure. We are in control,” concluded Gruenpeter. “Dejero has opened up a whole new world of possibilities for Bottle Tree Pictures and we’re now exploring the idea of expanding the concept into a series with a number of other Boston chefs and restaurants, not to mention the EnGo’s file transfer capabilities that we can tap into for our next commercial productions.”

Bottle Tree Pictures LLC is a New England based video production company and creative services agency, working both throughout the United States and internationally. Founded in 2018, Bottle Tree Pictures’ core focus is to help clients tell their stories. Bottle Tree’s innovative team of creative professionals are continuously finding new ways to better serve their customers, both on set and in post-production. Leveraging cutting edge technologies, Bottle Tree have earned their reputation as an industry leader in creative problem solving. With a huge spectrum of productions ranging from high end advertising and broadcast television, to live stream events and virtual conferences, Bottle Tree is positioned to continue their accelerated growth in the years to come. To learn more, visit www.bottletreepictures.com

Previous Story
← FOX Deportes ahead of the game with Dejero connectivity in pioneering ‘work from home’ flypacks
Next Story
Can you teach an old truck new tricks? Part 1: The evolution of the news truck →