The Nine Network’s Michael Sammut explained, “We had two projects that required us to deliver streaming video to remote overseas sites but where budget and technical constraints meant we couldn’t use traditional fibre or satellite links. The first was a semi-permanent studio setup where all we had was an internet connection. CuePoint enabled us to deliver a return program feed to the presenter, meaning we can now have them talk to the pictures that are going to air on the other side of the world, at a fraction of the cost of a satellite lease and with no ongoing costs aside from a normal internet connection.” 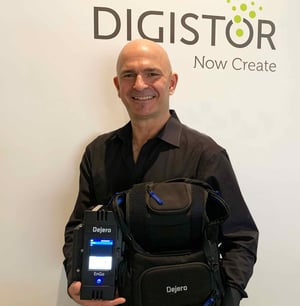 With CuePoint return video and teleprompting feeds from the broadcast centre can be seen in the field by the talent on a tablet or dedicated screen above or below the camera, or on multiple mobile devices by camera operators, field directors and technicians. It is also simple to scale the number of return feeds needed in the field.

Sammut continued, “The second was to enable our crews at major events, for example the upcoming Tokyo Olympics, to access what we’re putting to air from out in the field on their smartphones. This means they can be more mobile and stay out in the field where they need to be, without having to return to the office to see the vision.”

Sammut added, “It’s turned something that always required a large investment of time and effort into something we can simply turn on or off at a moment’s notice.” Nine uses its new Dejero CuePoint for ad hoc remote studio bookings where they don’t have return video connectivity, for news crews in the field on major events and for low cost studio setups where they aren’t able to install DVN/fibre/satellite connectivity but still require the return video services that a full-service studio provides.”

Sammut added, “We had an interesting use case occur after we installed the system where the social media producers of a show that was being filmed overseas needed to see what was actually going to air after the day’s filming so they could trigger their social media posts at the appropriate time. Of course they couldn’t receive our broadcast where they were, so we simply switched our off air feed to them on CuePoint so they were watching it overseas at the exact same time as our viewers, enabling them to optimise viewer social media engagement. It was a huge help for them.”

In an overseas studio Nine have CuePoint connected to an enGo transmitter and elsewhere it’s usually viewed via browser on a laptop or smartphone. This level flexibility and ease of use is not lost on Michael Sammut.

He concluded, “It’s just so simple. It didn’t require major investments of time or effort to install, and it just works. Other solutions require lots of configuration and the feeds can’t be as easily shared with anyone at short notice. With CuePoint, all the person at the other end needs is a browser and a login – so we can give it to people with only limited technical knowledge - and it delivers on its promise of extremely low latency which is crucial. Having CuePoint also means we’re able to operate more efficiently. We’re able to provide a better product than our competitors, at less cost. As soon as we turned it on and started using it, it went from being a nice-to-have to a must-have almost overnight. I do also have to mention and thank Digistor and our rep Olivier for their part in our success with CuePoint. They have been and are with us every step of the way and help us with anything we need. Having a partner like Digistor who operates with integrity and has a long term outlook for the client-supplier relationship is a win-win for everyone.”

Managing Director Andrew Mooney founded Digistor in 1990. His experience designing, installing and maintaining services for broadcasters and post-production houses had made it clear to him that the industry needed a group of experts who could look at things objectively. The result is a company that for 30 years has been providing elegant solutions to leading organisations in the most technically-demanding application areas.

Digistor provides solutions for the creation, management, storage and distribution of digital assets. From post-facilities to broadcast operations, from single studios to collaborative, networked environments operating across a room or across the world, Digistor empowers its customers through smarter technology and service solutions.