Drone connectivity—knowing when it matters

Originally published in the March/April issue of Air Beat magazine 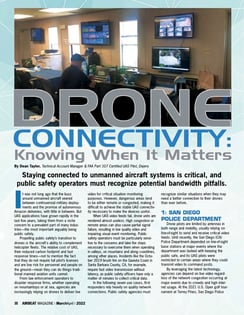 It was not long ago that the buzz around unmanned aircraft veered between controversial military deployments and the promise of autonomous Amazon deliveries, with little in between. But UAS applications have grown rapidly in the last five years, taking them from a niche concern to a prevalent part of many indusries—the most important arguably being public safety.

Propelling public safety’s transition to drones is the aircraft's ability to complement helicopter fleets. The relative cost of UAS, their reduced carbon footprint and fast response times—not to mention the fact that they do not require full pilot’s licenses and are low risk for personnel and people on the ground—mean they can do things traditional manned aviation units cannot.